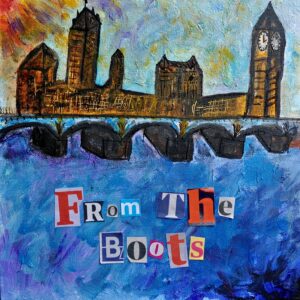 Freedom fighter, green warrior, great songwriter – Jamie Holmes is the full package. From the Boots, his new single, cements his place as one of England’s most promising songwriters. Sam Lambeth reviews.

“Music with a message” is how Jamie Holmes describes his music. He’s not wrong. With his commitment to tackling climate inequality, his support for sustainable clothing and more, it would feel almost wrong if Holmes then tossed off a song about sex or beer. The Stoke-born troubadour, now peddling his wares in London, has perfected a potent blend of political, personal and powerful. From the Boots, his new single, sees him once again in fine form.

It begins with an almost Baroque-style acoustic shuffle – it’s the kind of melodic structure you expect Robin Hood and his merry men to chow down to. However, Holmes bathes it in ‘60s reverb and the kind of noodling Keith Richards would doff his weird bandana thing to.

Ever since rising to prominence a few years ago, Holmes’ most impressive tool is his voice. Clear, soulful and spectacular, he’s able to control his voice into both a delicate hum and a powerful roar. From the Boots paints a vivid and almost violent picture of protests. Inspired by Holmes’ attendance at these protests alongside many climate activists, it’s an eye-opening and inspiring tale of courage, of battle, of rage and of uncertainty.

Bathed in ominous synths and with that guitar chug getting ever more stabby, From the Boots carries a permanent undercurrent of tension. By the time its irresistible coda reaches a gorgeous climax, you feel every frenzied breath, every raging shout and every unjust decision in the world’s protests. Influenced by folkie upstarts such as Bob Dylan and Billy Bragg, From the Boots is a fine entry into the canon of protest songs. Expect more when Holmes releases his debut album this summer.