This October, Los Angeles premiere post-punk event Substance returns for its 2022 edition. The event takes place through the 21st-22nd of October at the gorgeous Los Angeles Theatre, with a stacked lineup curated across each day of the festival.

Presented by Restless Nites, in association with La Sombra Luminosa, Das Bunker, and Dream, Substance has always been the best place to see luminaries from the 80s, as well as cutting-edge new artists poised to be the next rising stars worldwide spanning multiple genres in the underground music scene.

With classic post-punk acts on the bill such as The Jesus and Mary Chain and The Chameleons, along with Cabaret Voltaire’s Stephen Mallinder providing a DJ set, buying festival passes should be a no-brainer. This in itself makes the festival the place to be, but what if you factor into play that coldwave and EBM legends Parade Ground are performing, as well as their fellow Belgian Countrymen Absolute Body Control?

Then there are the current stars of the international Industrial, synth, and Darkwave scene such as Linea Aspera, Youth Code Kaelan Mikla, Kontravoid, MVTANT, Kanga, Light Asylum, and Boy Harsher—who will close out the event with a dance party in the Ballroom.

But one of the most essential parts of what makes Substance Festival special is seeing and discovering new acts live. So, in addition to your favorites listed above, here are five newer acts worth noting that are featured on the SUBSTANCE festival lineup this year:

As the project of Brian Flores, the Chi-town post-punk band has garnered an ever-increasing fanbase since forming in 2019. Their latest full-length LP Haunted Castle is coldwave perfection, exuding the icy romance of classic French bands like Asylum Party, yet dark enough to entrance fans of Twin Tribes, She Past Away, and indie enough to entice those who listen to Molchat Doma. Songs like “Dance With Me” off of the album highlight French Police’s uncanny ability to take a simplistic guitar riff and refrain and weave it into an instant darkwave classic.

With the electronic intensity of late fin-de-siècle acts like The Prodigy, Chemical Brothers and the emotional outbursts of Yeah Yeah Yeahs, Kumo99’s style is a frenetic reflection of the chaos of modern society. This sentiment is on full display in the explosive Dow Bones.

Controversial name aside, the enigmatic multimedia collective Cumgirl8 from NYC, call themselves a “sex-positive alien amoeba entity.” Sexual provocateurs and punk idealists alike, they combine the energy of Kleenex and The Slits (no pun intended…) with the chaos of early electroclash (particularly Peaches) and wreak havoc on the dance floor.

New wave/post-punk outfit Dechakhal, formed in Mexico City at the dawn of the pandemic era by Miss Kido and Salva Uriarte. With suy vocals in the Spanish language and a hypnotic four-on-the-floor disco beat, “Ellos” manages to be both sexy and sinister. There are elements of Depeche Mode and Lords of the New Church pulsing through their sound, amped up with early 90s house tempos and a gothic sensibility.

Phoenix, Arizona’s Secret Attraction certainly delivers a bounty of much-needed dreamy synth-pop and post-punk sunshine. Their pensive sound manages to be cerebral and introspective, yet impossibly catchy. Channeling Orchestral Manoeuvres In The Dark, China Crisis, The Colourfield, and Aztec Camera, the gentler stylings and compelling songwriting of Secret Attraction are a balm to anxiety and restlessness.

Tickets and passes for this historic Substance Festival 2022 are available now here. 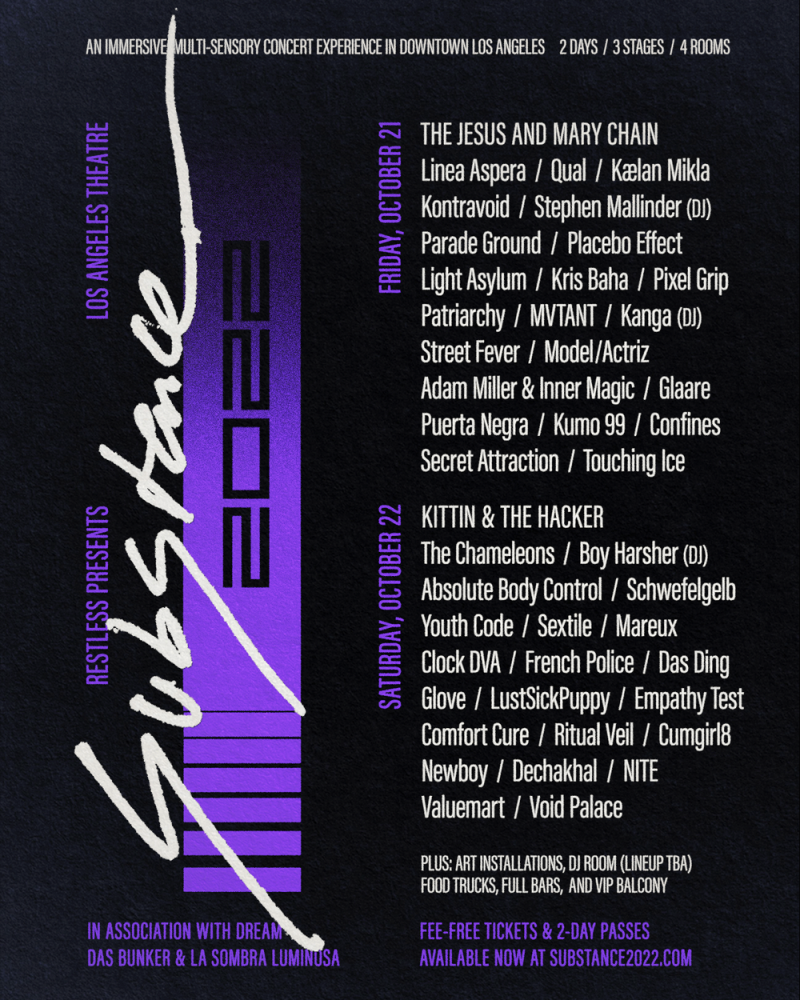 The post 5 New Artists to Watch at the 2022 Edition of Substance Festival—Los Angeles’ Premiere Post-Punk Event appeared first on Post-Punk.com.