Courses of Action is the latest release from Argentinian duo, Balvanera. Their first release on DKA after a series of LP, EPs, splits, and remixes, Courses of Action sees the duo focusing on a stronger dance-floor ready EBM sound.

The phrase “courses of action” is one that you usually hear from politicians or CEOs; comforting words to assure us that they will take the necessary measures without ever saying what they would actually do. We know that this is a phrase somehow devoid of meaning, completely empty, but we reappropriate this phrase, in times of turmoil, to think of our own actions and possibilities in these chaotic times.

The members of Balvanera, originally from the suburbs of Buenos Aires, cut their teeth in DIY hardcore and punk scenes before exploring the sounds of EBM. “Lucas had a band, Mer montreal. I would often go see them and we became very good friends,” says Agustina. “I was mostly involved in organizing, launching stuff on tape with defunct labels or doing fanzines or any other activity that surrounded music and DIY culture but not making music.” Inspired by newer artists like Linea Aspera and Sixth June, Balvanera decided to fill a void for a dark electronic music sound in Buenos Aires.

“Conditions to make music in Argentina are ridiculous,” says Lucas. “It’s monetarily impossible to buy gear. We pay 60% more in taxes, which means a synth that costs $300 USD, costs $600 USD for us. We make just 350/500 pesos a month for our full-time professional jobs, so you can imagine how it goes.” Despite the difficulty of purchasing new gear, they still managed to create a powerful form of full-on body music.  They soon found themselves playing illegal shows and DJing parties for a diverse underground audience hungry for new sounds. Balvanera’s live sets are a cathartic ritual for both the performer and audience.

“Everything is quite ephemeral. You play somewhere you then never play again, mostly playing for queer audiences. It’s a small committed community, we know each other rather well…Our live set is really cathartic. I do believe it’s because we know who the audience is and that’s basic for any ritual.”

Recorded before the pandemic hit, the music on Courses of Action will make you long to get lost on a fogged-out dance floor with its futuristic vibe, and groovy, sensuous bass lines. The track fits perfectly on the DKA label, blending the sounds and styles of artists like Multiple Man, High-Functioning Flesh, and Boy Harsher.

The whole record, perhaps aligning to that EBM ethos, speaks of the body; the body ill, the body in action, the mind sabotaging the body, the body dancing.  The cover art is inspired by a local artist, Liliana Maresca, who used movement to question the local political climate of the late 80s-early 90s, raising the bar to the Spinozian question of what a body can do. Agustina’s personal and political connections to Maresca and philosopher Walter Benjamin proved a fruitful creative exchange.

Recently Post-Punk.com spoke with the duo:

How did you encounter the work of Liliana Maresca and what about her work sparked your inspiration?

Agustina: I’m an art historian and also a producer in the Museum of Modern Art in Buenos Aires, which means I got the chance to research her entire body of work for a retrospective exhibition I was working on.  I also happen to be friends with Maresca’s daughter….When we decided our new album was going to be called Courses of Action, we immediately thought of her, cause she’s a synonym of action. Her works are inviting, careful, alchemy is usually involved. She somehow manages to keep things moving…I usually grab some of my themes from the arts, or aesthetics/theory. For instance, for this video, I was always drawn to philosopher Walter Benjamin because I feel we share the same concerns: The city, its passages, the crowd, ruins, memory, childhood, politics, and art. Benjamin is specifically relevant in Latin-America. The impact of his thinking implies a great deal of things in countries such as ours, Argentina, where not that long ago, a civic-military dictatorship was making people disappear.  We have to live with not knowing where they are. No tombs. No nothing. You then can imagine how important it is to think about memory, its mechanisms, and the impossibility of mourning and constant state of alert…Maresca was one of those artists always rethinking history and present time in her own extremely personal way.

Did the lack of accessibility to the equipment you wanted to see help innovate your own style path? What did you do to be resourceful?
Lucas: Equipment is just tools. Ideas and rhythm are in the mind of the musicians. Nowadays, there is a lot of software where you can program and shape your own sounds from scratch, and modify them as you wish. I think the secret lies in knowing how to combine those sounds, understand what you want to achieve with them.

The first thing that comes to mind is SPK when listening to your music, What were some of the classic EBM or industrial bands that inspired your music?

A: Oh wow, I’ve never seen this link happening. SPK is way more industrial than us. hehe. Maybe the Machine age voodoo or the Digitalis Ambigua, Gold And Poison era has some of the funky charm we’re looking for. But they were never in our reference spectrum though I sometimes go back to them. Of course, we are hardcore on classics like Front 242 and Nitzer Ebb when it comes to EBM.  Coil is my one true industrial love. We’ll be here ages just name dropping projects we love.

L: We were also really influenced by later EBM revival, like Schwefelgelb, or more technoid Silent Servant, and that A+W approach to contemporary ebm and techno, and also DKA with acts like Multiple Man and High functioning flesh. Or synths stuff like Martial Canterel, or Essaie Pas.

Do you think there is an undercurrent between hardcore punk that translates into EBM?

A: The energy for sure. The attitude. It’s pretty much we are here and we are going to do what we want and with whatever we have in hand.

L: Sound in both cases is very straightforward, it interpellates the listener. It gives courage and motivation.

How did the scene in Argentina connect to the Contemporary sounds of European Synth bands such as Sixth June and Linea Aspera?

A: There’s not really a correlation to those acts in terms of a scene. I guess we were the first ones around to make that happen and we probably remain as the one project that, at first, was pursuing and echoing those sounds but I also feel a few records ago, we started to change.

What do you think the parallels are between the underground party and Techno scene in Europe and Argentina?

A: It’s hard to say cause we really never took part in the European scene and it’ll be weird to make assumptions or draw conclusions. I  have the impression the spirit is the same everywhere, the difference here is that we don’t have really massive established clubs, so we are nomads with small illegal parties. I guess it’s just a matter of scale.

What does the LGBTQ club scene look like in Argentina and how does it inspire your sound?

A: It’s fun! We like the fact that you can be whoever you want to be. I usually dance with goth drag queens while we play. This probably sounds weird since there’s no live footage to prove it cause it’s always dark. hehe. But that, I enjoy a lot. Our next video if everything goes according to plan, is a performance by a fellow drag queen, Catarsis, a friend we made while touring in Chile. We respect her work so much and hopefully, it happens. That natural exchange we usually get is fulfilling.

Do you think there is a need for more diversity in EBM?

A:Diversity is always needed. You can never say there’s enough. For the most part, my favourite DJs around here are to name but a few, Diamin, May Mclaren, all of them LGBTQ and strongly influenced by new beat, EBM, and all sorts of techno, acid, etc. And I like it when things get eclectic. We need diversity in all possible ways.

What would you like to explore down the road?

L: Hopefully, everything starts rolling again and we can play live and tour abroad. Also, making this second video and working on the third, makes us want to continue exploring audiovisuals.

A: We are always thinking about adding instruments to what we do. Not necessary electronic hardware but  we’ll see. I’m not really thinking ahead. Today’s context is about one day at a time.

Watch the video for “Medium” below:

Courses of Action is out now via DKA Records, on digital and cassette. 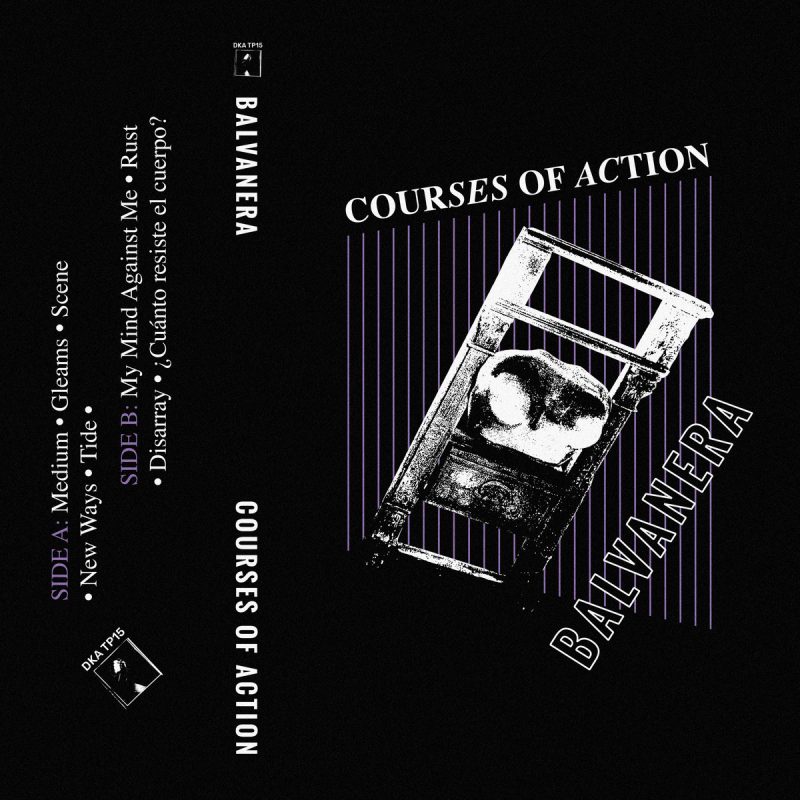