The sky like blood
Oh, steel to flesh
The earth so black
Oh, flesh and steel

Get ready, New York: the maiden launch of Flesh & Steel (a multi-date/multi-venue symposium of coldwave, darkwave, industrial, and EBM) is descending upon Gotham in early December.

With consecutive nights at Saint Vitus, Knockdown Center, the Meadows, and Good Room, FLESH & STEEL is poised to be the electronic/post-punk destination for the Eastern Seaboard—and beyond.

The first night finds electronic artists RIKI and ORTROTASCE headlining the Saint Vitus stage with support from the propulsive CES CADAVERES and UN HOMBRE SOLO, as well as a DJ set from David Castillo in CONFINES mode.

The next night, the widely acclaimed BOY HARSHER will conjure their dark trippiness all over Knockdown Center, alongside Belgian EBM legends A SPLIT-SECOND, propulsive dance engine SOFT CRASH, and Belgian post-punk/EBM pioneers PARADE GROUND, with DJ sets from Harriman and KONTRAVOID.

Flesh & Steel celebrates humanity, machinery, and new ways of thinking about all things electronic and invigorating. Castillo, Harriman, and Restless Nites’ Brian Tarney have impeccable reputations for developing exciting events while simultaneously creating community. When so many music festivals seem completely moribund, being short on vision and long on favors owed and corporate logos on backdrops, Flesh & Steel aims to create and lift culture coming from the heart—not the wallet.

“The name ‘Flesh & Steel’ comes from the song by SPK from their 1985 album Machine Age Voodoo,” says Harriman, acknowledging the contribution of the respected British new-beat progenitors to the electronic music continuum. “The mid-’80s iteration of SPK with Machine Age Voodoo was a daring one—it mixed pop elements with industrial ones, blending their early anarchic noise and sampling with a song-based sensibility. So pulling the name from the sexy track, ‘Flesh And Steel,’ on that album seemed to fit well, as did the inspiration for the flyer imagery that reflects the band’s aesthetic at that time… brutal but intimate.”

“There is a bounty of that rare synergy of community and culture between Restless Presents, Saint Vitus, and SYNTHICIDE, whose visions align on opposite coasts,” notes Restless Presents’ Tarney.

Flesh & Steel promises to be one of the best events of the year! Don’t miss it!

Boy Harsher, A Split-Second, Psyche, and more give this community an international platform
for three nights across three of Brooklyn’s finest venues SAINT VITUS, KNOCKDOWN CENTER, GOOD ROOM, and THE MEADOWS

Dec 3, early event at The Meadows 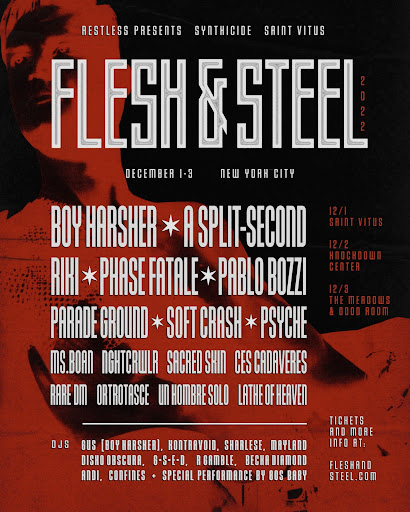