Gang of Four are making plans to tour North America in March 2022, performing songs from the era of their of the band’s releases between 1977-1983, including Entertainment! (1979), Solid Gold (1981), and Songs of the Free (1982). This tour coincides with the recent release of 77-81—a box set containing the band’s first two albums, early singles, rare demos, and more!

Gang of Four was formed in Leeds in 1976 by bassist Dave Allen, drummer Hugo Burnham, guitarist Andy Gill, and singer Jon King. The band pioneered a style of music that “inverted punk’s blunt and explosive energies — favoring tense rhythms, percussive guitars, and lyrics that traded in Marxist theory and situationism.” The band’s current touring lineup will include founders Jon King and Hugo Burnham, with guitarist David Pajo and 1980s-era bassist Sara Lee (B-52s, Robert Fripp). Bassist Dave Allen will not appear on this tour, citing personal reasons, but he remains a vital part of the band. David Pajo (Slint, Stereolab) is taking up the guitar duties following the passing of the dearly departed Andy Gill.

After Gill passed away in February 2020, with his previous incarnation of the band issuing two EPs featuring his final recordings. La Roux, Serj Tankian, Gary Numan, Dandy Warhols, and more later contributed to a tribute album for Gill in May 2021.

Jon King, who last played with Gang of Four in 2012, adds, “It’s been too long, can’t wait to get back at it, be positive, agitate for the good. Getting back together with Sara and Hugo will be wonderful, and working with David P will be a blast. A chance to bring light into the darkness.”

“I am excited to be back out next Spring with two of my dearest Gangsters and a new one,” adds Burnham, who returns to Gang of Four for the first time since 2006. “Jon, Sara, and I cannot wait to make stylin’ loud noises with the fierce and fabulous David Pajo. Bring your hearts and your ear-plugs.” 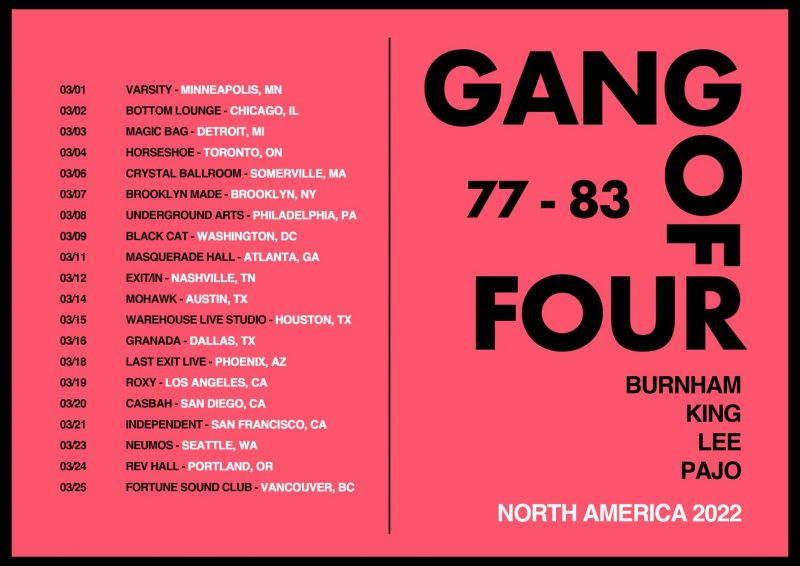