Valerie Green and Paige Shedletsky are no strangers to remote collaboration across state lines. Green, based in Indianapolis, and Shedletsky, based in Louisville, form the powerful Karate, Guns & Tanning. Their latest track, “Breaking Teeth”, is an incendiary blast of industrial-tinged post-punk, shoegaze, and dream-pop that draws on influences as varied as the Riot Grrrl movement, Grotesque art, and the gonzo visions of Hunter S. Thompson.

Breaking Teeth, off the upcoming album Concrete Beach, is quite literal in its message. “It’s about an anticipated fight at an underground club, the crowd going wild, blood and teeth flying, but the song itself is kind of a vessel for anger,” says the band. With the state of the world at the time– Trump and everything going on, it felt good to yell, to fucking shred. In a time where our administration is making women and LGBTQ women feel vulnerable, it felt good to create something that felt angry and powerful.”

Breaking Teeth, with its blazing guitar solos, gritty bass, and chanted rally cries of “Fight! Fight! Fight! Fight!”, evokes the hyper-distorted noise-pop clamor of Sleigh Bells and a great 70s B-movie. The track describes an underground fight club, where a match is happening and the crowd is screaming, blood and teeth flying through the air.

The band worked with frequent collaborator, Southern California visual artist Andrew Knives, for the dazzling, disturbing animated music video. “He’s completely tuned into our trippy aesthetic,” the band says. They decided to recruit Knives’ talents to create a visual concept for the entirety of the album.

Knives took the ball and ran with it full force: “The underlying tone that there is a sense of chaotic “fight” or energy within all of us — that spans far and wide,” he says. “The video starts and ends with a television set; in the beginning, it starts in the middle of the desert, symbolizing a sense of isolation. It then is found at the end, in the living room of a suburban family, symbolizing that chaos is next door (and inside) all of us.”

Best friends for fifteen years, the duo behind Karate, Guns & Tanning employ their unique telepathy of close friendship in their instinctive songwriting process. “We basically share a brain,” Shedletsky says.

Shedletsky and Green first met in Colorado in 2005, waitressing together at a creepy diner fit for a David Lynch set. “It had these black and white checkered floors and every time the lights would flicker, it always felt like something ominous was about to happen,’” Shedletsky recalls. At the time, Green, a trained musician with wildly eclectic taste, was living in a house with an analogue studio; Shedletsky was a teenage noise-rock obsessive with a Fender Rhodes keyboard, and a fondness for avant-garde iconoclasts like Captain Beefheart. Green invited her to come over and check out the studio and soon the two formed their first band, Good Housekeeping, a dream-pop group that drew inspiration from Cocteau Twins and Twin Peaks.

Despite Green moving back to Indiana in 2009, the two kept trading song ideas. Karate, Guns & Tanning formed in late 2019, taking their name from a sign above a strip mall in Green’s hometown of Plainfield, Indiana. When COVID hit, they found themselves with ample free time and decided to complete Karate, Guns & Tanning’s debut album at last.

Green recruited two friends from the Indianapolis music scene, guitarist Joy Caroline Mills and drummer Daniel Guajardo. In typical 2020 fashion, the album was recorded remotely, and some members of the band had never actually met in person until after the album was completed. The present lineup consists of Shedletsky on keyboards and assorted synths, Green on lead vocals and bass, Joy Caroline Mills on guitar, and Daniel Guajardo on drums.

Concrete Beach is the culmination of all those years of Shedletsky and Green trading tracks with little more than a band name and a GarageBand setup; with the addition of Mills and Guajardo, it became a passion project during the most destabilizing year in modern history.

Concrete Beach will be out in spring 2021. When touring resumes, catch Karate, Guns & Tanning breaking teeth at a concrete beach near you. In the meantime, you can also pre-order this album on vinyl here. 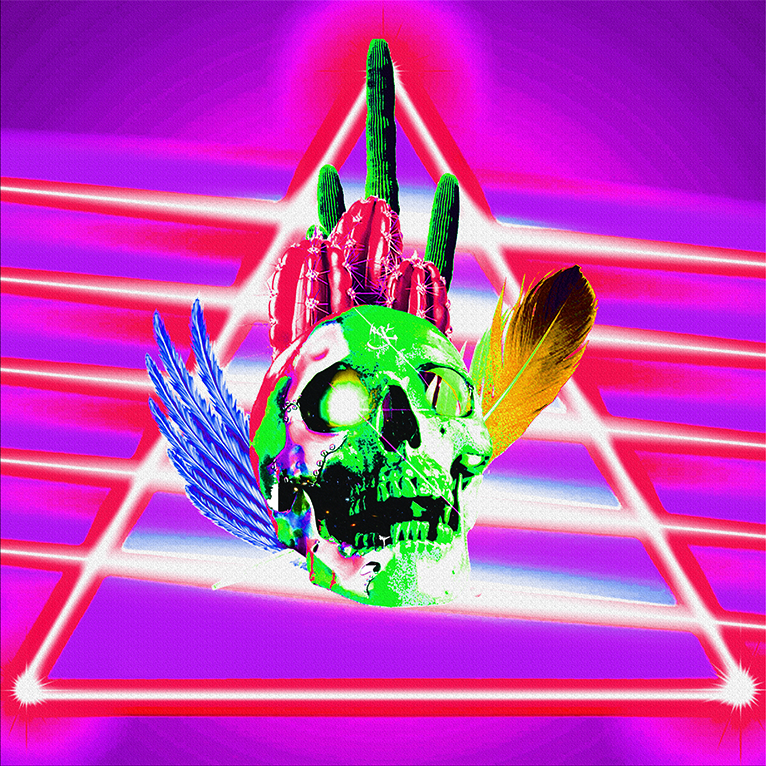 The post Karate, Guns & Tanning Take You On A Gonzo Adventure With “Breaking Teeth” appeared first on Post-Punk.com.