Last month, we brought you the dark, futuristic, goth-friendly dance track NBT (Nice Bass Track), from Phoenix EDM outfit Simulated Youth. Simulated Youth has a new track out now: Kill The Messenger. The mastermind behind the project, Zach, was gracious enough to do an interview with Post-Punk.com, where he gave some valuable insight into his inspirations, his process, his passions, and his collaboration with El Salvadorean singer Camoragi.

Your music often references cyberpunk or a retro-digital aesthetic. What draws you to this?

I’m really fascinated by the notions of alternate realities or “living in a simulation,” also different artistic and scientific predictions for what our future may look like. So because of this, the whole cyberpunk aesthetic is really appealing to me. There are lots of artists who’ve contributed to this style visually over the years, but only in recent times has there been more cyberpunk-style music which I find appealing and want to contribute to myself.

You collaborated with El Salvadorean singer Camoragi with NBT. What sparked your collaboration?

Camoragi and I met on the Indie Music Feedback Discord server, which I randomly learned about on Reddit. It’s a great place for indie musicians to openly discuss ideas, seek feedback, or simply share what they ate for lunch! They have live music feedback three times per week, where dozens of musicians from all different genres submit a song for everyone else to listen to and provide subjective and objective feedback. During one of these sessions, I heard a song by Camoragi and immediately thought her voice would sound great on my track. From there we started chatting and then collaborated on “NBT (feat. Camoragi)” which was my last release in March.

Tell us a little about your animal rights activism, particularly the dog meat trade. It’s a big passion for you…what got you involved?

I lived in Asia for three years, and was directly exposed to seeing dogs used for meat. It was extremely disheartening, as I’ve always loved dogs. For nearly eight years now I’ve been a monthly contributor to Soi Dog Foundation and Animals Asia (who both largely focus on the dog / cat meat trade). I of course want to do more than simply donate, and if I ever reach any sort of position of influence in the world, this would be a big goal of mine. In general, dogs are extremely valuable to society and can perform hundreds of jobs and specialized tasks, things that primates or other intelligent animals are not able to do (such as disability assistance, disease detection, military/security applications etc.). So regardless of them being incredible companions (which they are, such as my dog Maya!), they are uniquely valuable to society in other ways and therefore should be regarded much higher in society.

What are you interested in exploring next with your music?

Now that I have a few songs out, I want to start preparing for live performances which will be significantly easier if using my own vocals. My next song, Ghost in the Machine, will come in May and will be the first of my releases that uses largely my regular voice and not the “Android Vocal Version” I’ve done in past releases.

I like to break my songs up into different pieces. I’ll sit at my laptop scrolling through hundreds of different virtual instruments / synths until I find one that sounds interesting. Then I’ll improvise different notes, different octaves with those notes etc. until I get an overall sound I like. Then I’ll try to make a chorus (drop / hook or whatever you prefer to call it) first which is arguably the most important part of the song. As long as I can figure that part out, I’ll be able to finish the song. So I actually have at least 10 songs that are sitting there with a chorus part already done, and I just need to build out the rest of the song with the intro, verses, breaks, in addition to writing lyrics. Usually, the name of the song is simply the first thing that comes to mind when hearing the finalized chorus. I like the improvised feel of that.

Who would you like to work with in the future?

Collaborating with Alice Glass, Catnapp, or Labyrinth Ear would be very cool. Die Antwoord as well although that would be a little more random haha.

How would you describe your music? What themes, ideas, and emotions do you like to explore?

-To frame it up, I would probably describe it as “dance music with a mixture of dark and bright moods in every track.” In each of my songs, I always like to combine dark / bright themes. For example, in “Kill the Messenger” you’ll hear this extremely upbeat dance-pop vibe and almost goofy chorus line, but with what sound like very violent lyrics. Or in Money in My Tummy, you have this very uplifting chorus between dark chaotic verses. Although I am still developing my own sound, so far my signature is probably climactic instrumental endings.

What’s the best advice you’ve ever been given as a musician?

Focus on objective feedback and for the most part ignore subjective feedback. By that I mean if several people say “this needs more bass” or “I can’t hear the kick” or “the synths in the chorus should be louder to cut through,” those are all valid things I can look at doing to improve the song. On the contrary, if someone simply says “I don’t like the song” or “that robot voice is annoying” or “you should hav written XYZ in the lyrics” it’s important to remember that not everyone will share the same subjective opinion.

What are some of your favorite post-punk, goth, and synth artists?

Most of my favorite songs are from Crystal Castles, such as Kerosene, Vanished, Good Time, Plague, and lots more… Of course with them no longer existing, I have grown very fond of Alice Glass’s solo work. It’s always a bit tough to classify artists, but I also feel Catnapp would apply here, and I’ve become a huge fan of her songs and style recently.

Kill the Messenger is your latest release. What’s the story behind it?

I decided to call this one Kill the Messenger long before I had any lyrics done. Once it was ready for lyrics, I wrote a version that was more about the typical meaning of the phrase “kill the messenger” which basically means to not take things too seriously or get angry at people just for telling you something you don’t like. However, once I recorded the vocals, I thought it sounded too cliché. I then rewrote the lyrics to take “kill the messenger” literally. The final version of the song, with the word “kill” said no less than 93 times, may sound intense based on the lyric alone. However, I’d challenge anyone after listening to say this is not an extremely danceable and dare I say, “fun” song! 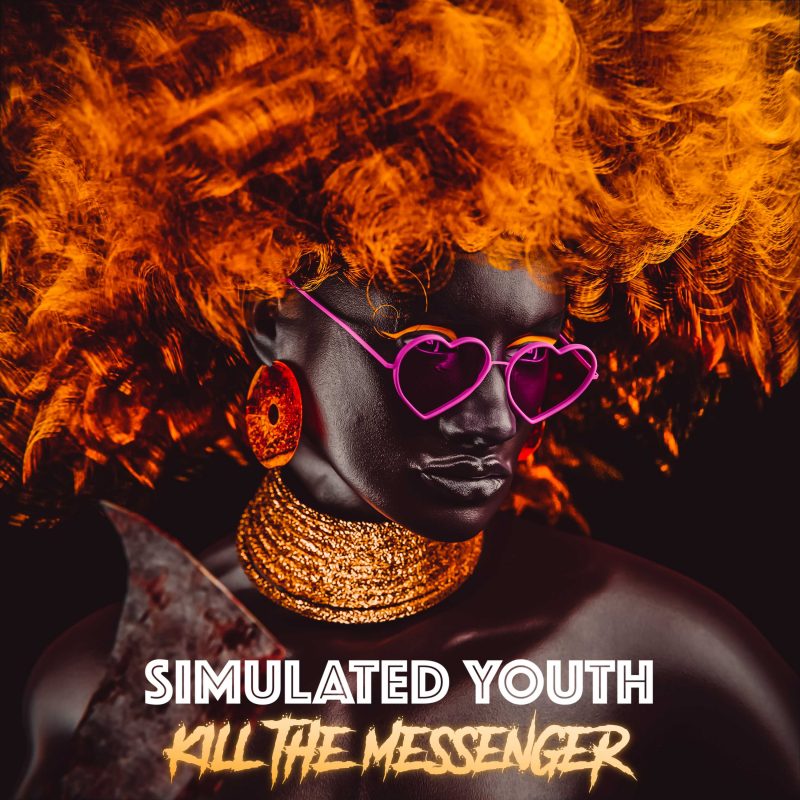 The post Kill the Messenger—An Interview with Simulated Youth appeared first on Post-Punk.com.