Dust off your bucket hats and unearth your favourite pot of biodegradable glitter because after two long years away, Reading Festival and its northern counterpart are back from the grave. With a lineup that saw more changes than the bar has poured pints over the years, it was finally confirmed and frankly, it was a belter (thank you, Gerry Cinnamon). The rain kindly held off, and with a new set up of two main stages, there was even more talent to be found in the confines of Richfield Avenue in 2021. From a surprise set from Frank Carter to a last minute appearance from You Me At Six, this year’s Reading Fest really was everything we’d hoped for and more.

You Me At Six

It’s been 719 days – or just shy of two years – since You Me At Six last set foot in front of a crowd and you can tell just from their social media activity over the past few days that they are dying to get back on stage. Reading Festival has always been a home for this five-piece, and they say as much when they finally find themselves with instruments in hand, ready to play a show – there really is no better place to make their return. At 1:25pm, it’s a strangely timed slot for You Me At Six, being a last minute fill in for Fever 333, and not one that they’d usually be offered having previously headlined the now retired Radio 1 stage, so it’s no surprise when the crowd starts off a little slow. With the tireless charisma of front man Josh Franceschi, however, it’s not long before the energy picks up, reflecting that on stage and creating a wonderfully sunny atmosphere that mirrors the early afternoon weather. With a setlist made up of hit after hit, the band’s short slot is all fans could hope for from the return of their band, and the response sees the faces of each band member light up in response throughout, not least during 2014’s fan fave, ‘Room to Breathe’. Look around and you’ll see fans dancing, crying, screaming and moshing in the response to this perfectly executed return; this set is emotional, it’s hectic and it’s oh so fun, and we could not be more delighted to have the YMAS boys back.

I Don’t Know How But They Found Me (iDKHOW)

It’s been a few years since iDKHOW first introduced their debut single, the tongue-in-cheek ‘Do It All the Time’. Since then we’ve been treated to a stellar debut album and a seen huge rise in popularity for this duo, and after starting out in the UK at this very festival, seeing them on the main stage today seems like the perfect progression. Today’s performance is one to be remembered. The pair maintain a mostly stoic persona, but as they make their way through their very cool, very funky set, you can’t miss the short but wide smiles that appear on their faces as they look down at the sight in front of them. Bubbles float up from the crowd as front man Dallon Weekes, hiding his eyes behind dark sunglasses, shows off his phenomenal vocals with ease and drummer Ryan Seaman stretches his legs, standing on his drum kit for a better view, really letting the smile take over his face now as he appreciates the gravity of what lies before him. The set feels too short – even with the inclusion of an interactive performance of a currently unreleased song – but it gives you a taste for what iDKHOW are really capable of and leaves you wanting to find out more. With such undeniable talent and songs that you can’t help but dance to, we’re expecting this band to rise through the ranks very quickly at this festival and we cannot wait to see where they end up.

If you’ve been nursing a nasty hangover and are looking for a more chilled out vibe, Beabadoobee is the woman for you. Inciting an immediate crowd response, it’s clear this indie punk artist has picked up a lot of fans along her journey – a suspicion that’s confirmed as the gleeful cheers continue throughout the set. Her faultless voice is wonderfully juxtaposed with the cool guitar riffs, creating the perfect summer sound and seeing us into the impending autumn in the best way possible. As with most other acts over the weekend Beabadoobee is as excited as it gets to be back on stage, her smile lighting up the crowd even more than the afternoon sun, drawing in unsuspecting new fans as she makes her way through her spritely set. It’s only been a few years since she started out, but Beabadoobee has found her footing with ease, and today only cements that fact further, the melodies hanging around your head long after she leaves the stage.

Not a single word has been uttered yet but today’s afternoon crowd has already started up a chaotic pit in anticipation of Bob Vylan taking to The Pit stage. It’s no surprise then, that the moment the do appear, this rock / rap sibling duo have the crowd eating out of the palms of their hands and it’s a set that promises to have started as it means to go on. Thankfully, it does not disappoint. Ironically wrapped in a Union Jack, the pair kick off with ‘I Heard You Want Your Country Back’  and it’s immediately clear that they’re not here to make friends as this is just the first of many controversial statements made during the set. Front man Bobby Vylan is fearless in more ways than one, however, jumping straight into the crowd and leaving himself at the mercy of the crowd, as well as humorously threatening them with a bat as he chants, “Chat shit, get battered”. It’s been a while but this performance more than makes up for the lack of live shows following the release of their album in 2020 and whatever your view on the band’s politics, there’s no denying that this is a band that are set to make their mark on the industry. Today is just the start. 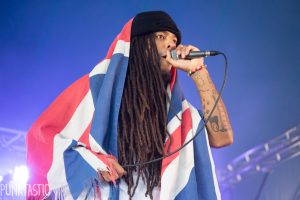 If there was ever a band that deserve to play to a packed out crowd, it’s Loathe. Today, however, that’s simply not the hand they’re dealt and The Pit feels all but empty when this prog rock band take to the stage. Fortunately, though, the small group of fans that have turned up have done so with boundless energy, ready to embrace the carnage that Loathe are wont to bring, not letting the lack of crowd prevent them from starting chaotic pits and enjoying every moment of this phenomenal set, losing their minds as if it might be the last time they ever capture this band live. The energy in the crowd has to come from somewhere, though, and it would be remiss not to mention the sheer force of nature that is Loathe themselves. Giving as much to their performance as they might at a sold out headliner, there really are no words to accurately describe the talent and charisma that radiates off the stage. They may be the underdogs today, but Loathe are a highlight of the weekend so far and we can’t wait to catch them as they continue to catapult themselves to even greater success. 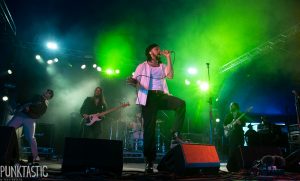 Holding Absence are a band that continue to go from strength to strength. Releasing their groundbreaking sophomore album during lockdown, they’ve delighted existing fans and picked up new ones in the process, which brings us here to their very first Reading Festival appearance. From the second they bounce onto the stage, guitarist Scott Carey’s face lights up at the view in front of him, and it’s a joy that’s perfectly mirrored by his band mates, signifying that perhaps being on stage is their absolute favourite place to be. Holding Absence are a band that effortlessly evoke emotion but never more so than when front man Lucas Woodland is belting out those long, drawn out notes and if you take a moment to look around at the crowd, it’s these moments that see eyes glisten and mist with the sheer force of his phenomenal voice. Before it’s all over, he takes a moment to express just what this means to them, boldly claiming that “this field could be empty and this would still be one of the best days of our life”, and with the smiles still firmly on their faces, you can’t help but believe them. It might just be the best day of ours, too. 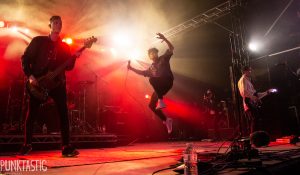 Our night ends with a weekend highlight that comes in the form of rainbow haired Awsten Knight and his equally flamboyant bandmates in Waterparks. The tent is full long before they arrive on stage, buzzing with the anticipation of this last minute lineup addition – Waterparks has brought in the masses and the masses are ready to dance. If tonight is anything to go by, it’s not possible to be a casual Waterparks fan – no introduction is needed as the crowd screams along enthusiastically to every word from this nine song setlist, leaving no opportunity to breathe or rest. While that may be the case, however, Knight graciously takes the time to introduce his band, each member receiving a fierce welcome as fans lap up every word that comes from Waterparks’ very chatty spokesperson. While 2019’s ‘Turbulent’ is a definite highlight, it’s hard to pinpoint any other single moment, as the first notes of every song are met with equal excitement that’s verging on obsession. It’s a perfect welcome back after over a year away from the stage, and despite what is sometimes an excessive reliance on backing tracks, Waterparks really do deserve this headline slot this evening. They leave the stage promising to see us next year, and suddenly we are all far too excited for what this band will bring us in 2022. No doubt we’ll be waiting impatiently until then. 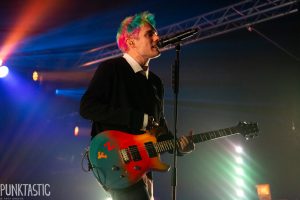