Morrissey Bites Back after Not So Vegan Roasting on Simpsons

Shocking no one, Morrissey was adamantly NOT at the table for his Sunday Roast, as The Simpsons spoofed The Mancunian expat singer in their latest episode, entitled Panic On The Streets of Springfield (19 April).

In this tome, Lisa discovers Quilloughby (and his band The Snuffs) on a streaming service, and immediately becomes enchanted with “their brand of literate, sardonic music” and his “militant vegetarianism.” She becomes obsessed with the depressed 80s British singer, who bears more than a passing resemblance to the Moz of yore.   Her new imaginary friend teaches her the art of disparaging scorn.

Morrissey has recently faced condemnation after wearing a pin featuring the logo of far-right/anti-Islam political party For Britain during a recent TV appearance, calling Chinese people a “subspecies” due to their track record on animal welfare, asserting that Halal certifiers support ISIS, mocking London mayor Sadiq Khan’s accent, proclaiming borders are necessary for order, and claiming he couldn’t possibly be racist because “everyone ultimately prefers their own race.”

In light of Morrissey’s (well-documented) rhetoric, The Simpsons went right for the jugular: Lisa gets the opportunity to attend a Snuffs reunion concert (stealing Homer’s credit card), only to discover Quilloughby has aged into an ungraceful, racist carnivore. “…I found out veganism was invented by foreigners, for whom there are far too many on this planet,” Quilloughby announces on stage.

The show did not approach Morrissey to voice his cartoon doppelgänger, likely because he previously declined a cameo in Season 15’s The Regina Monologues. Quilloughby was instead voiced by a spot-on, dare we say, gleeful? Benedict Cumberbatch, with music penned by Bret McKenzie (Flight of the Conchords).

Hours after the episode aired, Morrissey’s management snapped back on Facebook. 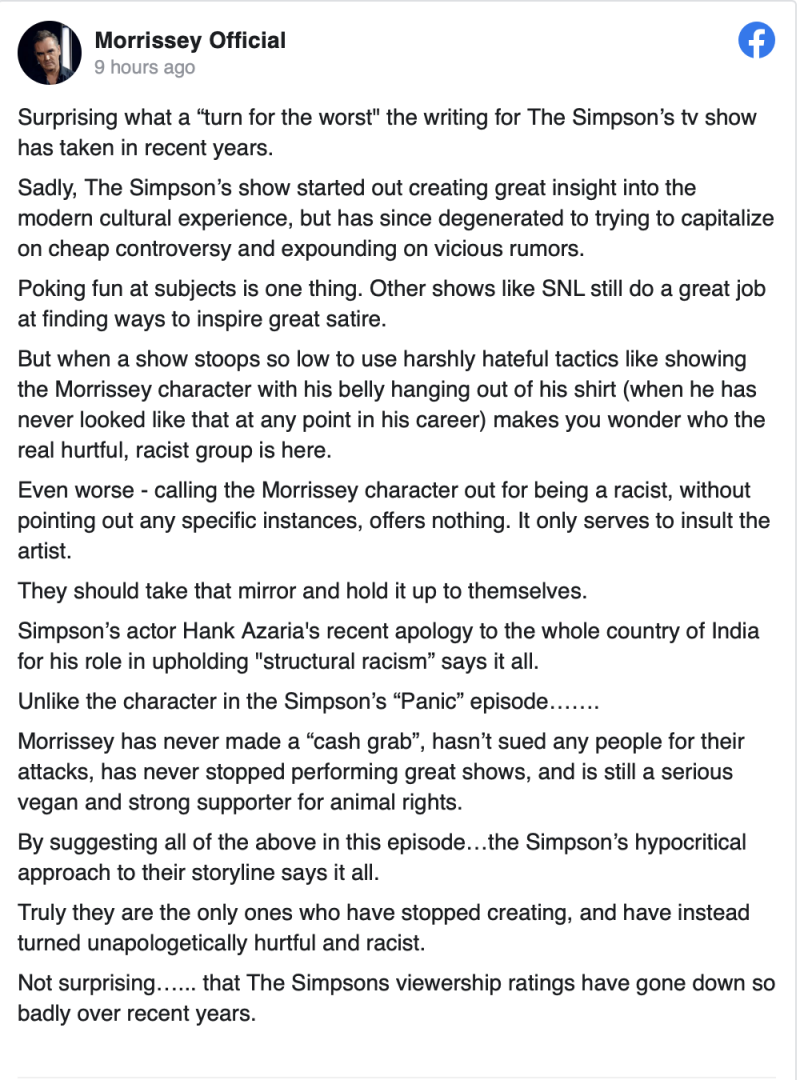 For the curious, Panic On The Streets of Springfield is currently available on Hulu.

The post Morrissey Bites Back after Not So Vegan Roasting on Simpsons appeared first on Post-Punk.com.

The Living release “Live by the Gun” video

Alice Cooper has released a lullaby album for babies