After a year of waylaid plans due to the pandemic, Dead Can Dance are happy to announce a rescheduling of their North American Spring Tour for this autumn. Brendan Perry, Lisa Gerrard, and CO are on track to kick things off at the San Diego Civic Theatre with several California dates following in Los Angeles and San Francisco.  They will make their way east via Denver, Chicago, Detroit, DC, Philadelphia, NYC, Boston, and Toronto, before heading back west to Vancouver and finishing in Seattle at the end of October.

These are the first North American appearances Dead Can Dance will make since their 2013 tour in support of their eighth studio album Anastasis.

Following their sold-out two-legged European tour in the Spring of 2019, which ended with a triumphant show at Athens’ stunning Odeon of Herodes Atticus Amphitheatre, the band will finally be taking their spectacular three-decade ‘Celebration of Life & Works’ across the Atlantic, for a set that includes music from their 2018 studio album Dionysus, as well many of their much loved classic songs from their extensive catalogue such as The Host Of Seraphim, The Carnival Is Over, and Yulunga, and more!

In the meantime, Dead Can Dance’s Brendan Perry has recently released a new solo album, “Songs of Disenchantment (Music from the Greek Underground)”, and both Lisa Gerrard and DCD keyboardist Jules Maxwell are set to release their collaborative album Burn this coming May. 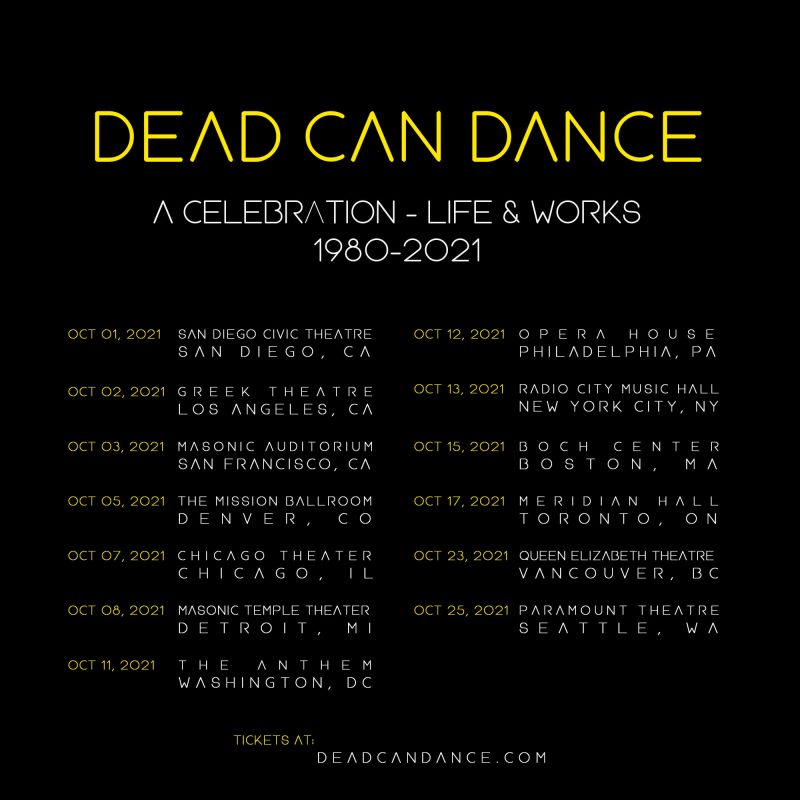