Restless Presents, in partnership with SYNTHICIDE and Saint Vitus Bar in Brooklyn, announces the single-day lineup, single event passes, and ticket bundle packages for FLESH & STEEL, a multi-venue, multi-date descent into darkness. The first-ever edition of NYC’s dark music festival was named after the SPK song from the 1983 album Machine Age Voodoo.

Welcoming all flavours of darkwave, industrial, EBM, and coldwave, the festivities commence in Brooklyn from December 1st- December 3rd. Conceptualized and curated by Restless Presents, David Castillo of Saint Vitus, and DJ/promoter/journalist Andi Harriman of SYNTHICIDE, FLESH & STEEL celebrates humanity, machinery, and innovation. The lineup for this festival spans forty years of electronic bliss as well as the planet.

First, here’s a glimpse at some of headlining acts to enjoy in Gotham’s dark dwellings:

Canadian synthpop legends Psyche will be gracing the stage of St Vitus on Thursday. Psyche formed in Alberta in 1982, becoming one of Canada’s first electronic bands. Darrin Huss (vocals), his brother Stephen, and synth player Dwayne Goettel (Skinny Puppy) released a plethora of dark synth dance-floor favourites, including the hits from Unveiling the Secret.

Darkwave icons Boy Harsher break the rhythm on Friday at Knockdown Centre. Drawing heavily from cinema, theatrics and graphic design, the band has made major headway in the last few years, particularly with Pain, their infectious BDSM-tinged anthem.

Das Ding, aka Danny Bosten, will also be at Knockdown Centre on Friday. The Dutch innovator unleashed powerful dark electro in the vein of Fad Gadget, Kraftwerk and New Order as electronic music started gaining traction in the early 80s. Das Ding’s DIY tapes gained a cult following and were often featured in zines of the Dutch synth scene, but he remained relatively obscure for a couple of decades until Minimal Wave Records’ Veronica Vasicka unearthed his work after coming across a blog about unknown synth music.

Belgian EBM pioneers A Split-Second established the building blocks of EBM when they formed in 1985; their music influenced the creation of the New Beat genre. Their 1986 track Flesh is a timeless synth classic. They’ll also be at Knockdown Centre on Friday.

Who else will be materializing in NYC next weekend? Here are five of the hottest new darkwave acts that are playing at the festival:

Riki burst forth on the scene a few years ago with her captivating new-wave, post-punk, and Italo disco melodies. Her taste for nostalgia, fantasy, and a charming wistfulness comes through in her 80s synthpop and new romantic style. She’ll be gracing the stage at The Meadows on Saturday.

Catherine Moan is the time-bending solo electronic pop project of Angel Jefferson. Jefferson pays tribute to the style and instrumentation of early Depeche Mode, while channeling a soft vocal delivery reminiscent of Strawberry Switchblade’s Rose McDowall. Adrift in a sea of nostalgic bliss, the music goes beyond being completely a throwback act, with a production imbued with the modern glow of more contemporary synth-oriented artists such as Chromatics, CHVRCHES, and TR/ST. She’ll be at the Texas stage at Knockdown Centre on Friday.

The collaboration of members of That Which Is Not Said (TWINS/DKA, 2MR) and Multiple Man (DKA, Fleisch), Matt Bias and Chris Normal create a humid, sleek atmosphere of dance music with a pop sensibility. Matt’s silky vocals beckon as they slide over EBM-tinged basslines and 80s synth tones. These hertztone wizards will be at the Bad Room on Saturday…if you’re feeling naughty.

Berlin’s Soft Crash is the new music collaboration formed by Hayden Payne, aka Berghain resident Phase Fatale and Pablo Bozzi of Imperial Black Unit. Combining references such as William S. Burroughs and J.G. Ballard, the project explores the fetishization of technology and the body, and how the line between those is perpetually blurring. Bozzi and Payne have been at the top of the industrial techno and EBM circuit through the last several years. Payne and Bozzi look to their core influences of synthwave, disco, and early techno to carve a new path as italo body music pioneers. They’ll be making their way to the Knockdown Centre on Friday.

Philadelphia’s Night Sins mastermind Kyle Kimball has long been the drummer for Nothing, but Night Sins is making its own mark. Night Sins frolic down the same musical path as The Sisters of Mercy and Clan of Xymox with hints of The Mission, NIN, and Nitzer Ebb along the way. Kimball’s shadowy vocals are the glue holding the sound together, a rich baritone howling through the night fog. You can catch these dark maestros Friday on the Texas Stage at Knockdown Centre. 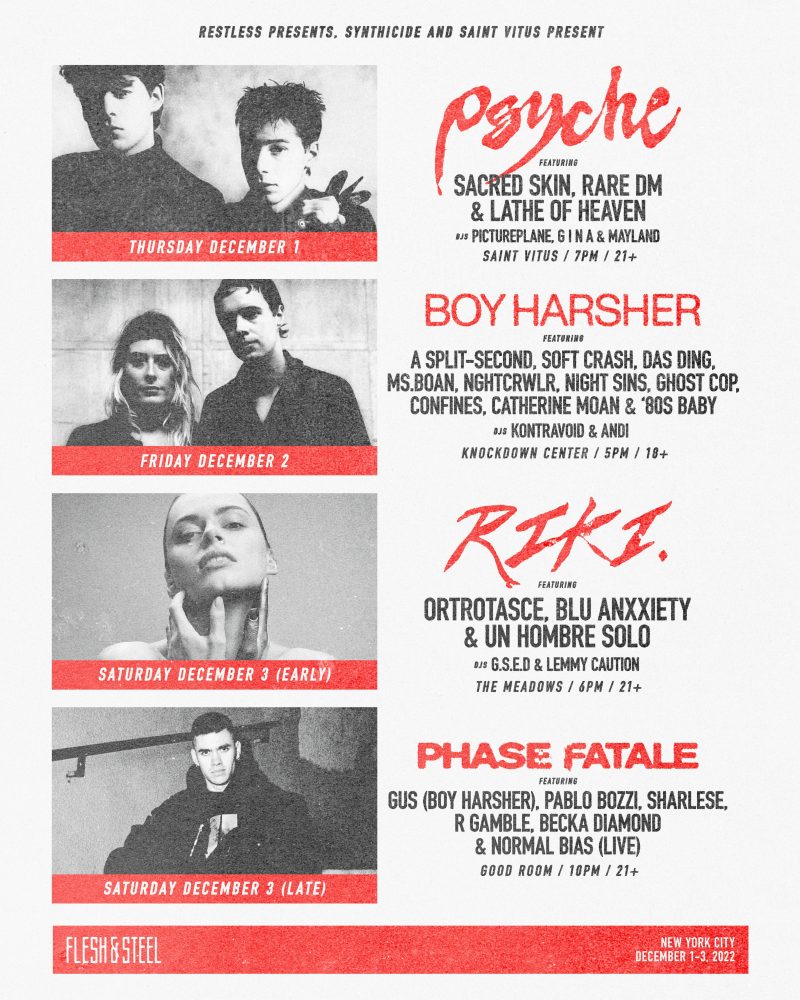 The post Five of the Hottest New Darkwave Acts to See at Flesh and Steel NYC appeared first on Post-Punk.com.