A staple of British culture and somewhat riddled with controversy, this year’s Leeds festival was set to take a stride forward into new territory. What used to be a lineup filled with primarily rock and indie offerings has morphed in line with the music zeitgeist. Whether part of the party who rules this changing as an abomination or you’re eager to see what’s currently popular take centre stage, the billing was certainly varied enough to excite fans. With the weather choosing mercy on the usually damp hillsides and a sense of refreshed excitement at new lineup additions (albeit some disappointing ones too), lets dig into the acts that made this bank holiday weekend one to remember.

Opening mainstage could have easily been a detriment to the punk rock band, but as soon as the distinctive whirring of ‘My Town’ erupted from the stage, the time of day was forgotten. The band often advocate against sexism within music spaces, with one of their most iconic choices being to enforce an all girls mosh. It was no different today, with Carter christening the moment with the line “You’ll not see a happier mosh pit all weekend.” Let it never be said that they don’t put on one hell of a show and their crowd interaction is second to none as their forceful tracks electrified the air. In grandiose fashion towards the end of the set, during penultimate track ‘Devil Inside Me’, they had the crowd hoisting up guitarist Dean Richardson on the left and Carter himself on the right, as he encouraged a pit to begin circling around them both whilst they continued on with the song, Richardson playing his hypnotic riffs with as much ease as he would on stage. It’s moments like this that you can appreciate the mutual respect between them and us; in so few gigs could you have this take place safely and effectively, but Frank Carter & The Rattlesnakes are no ordinary band. [JM] 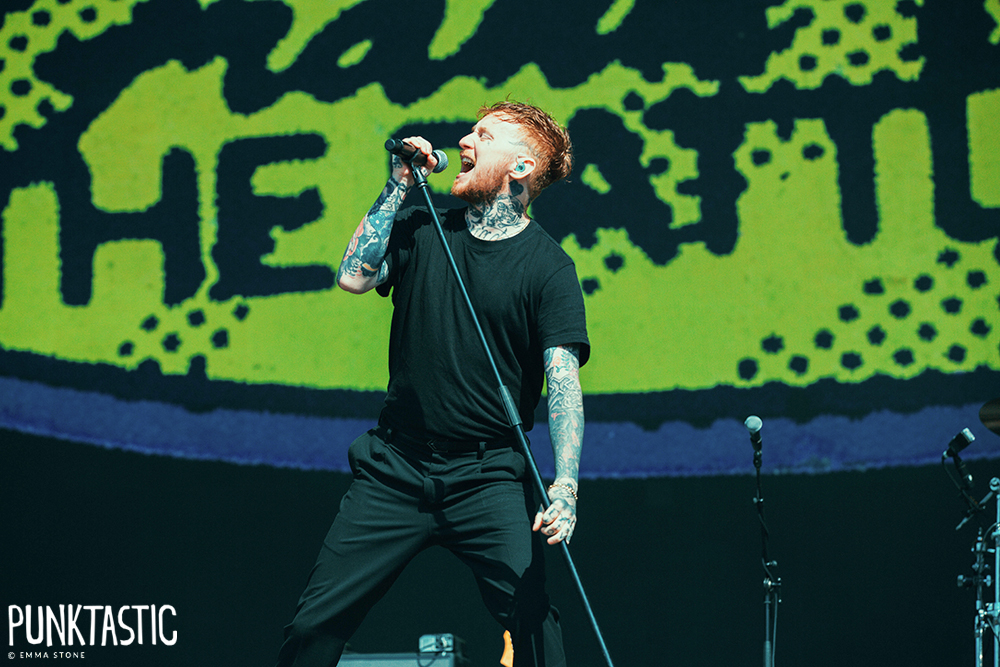 An almost perfect follow up in capability and message to the previous act came Manchester-bred foursome Witch Fever, on the Festival Republic Stage. Watching front woman Amy Walpole is enchanting, championing a fiery intensity as she stalks the stage, eyeing up the crowd with her sharp stare. Then come the heavy hitting brit-punk riffs that suck in the crowd like a whirlpool, being drawn to the heated vocal style and outlandish melodies. Their enviable energy and devilish presence fooled the crowd into thinking this was the Main Stage headliner for the day, and they certainly have the chops for it. Walpole stood on the barrier and just looked at us all; minutes went by, with red triangles accenting her eyes like daggers symbolising her fury as she spoke of the racist and homophobic nature of her industry. We clung to her every word and soon she was accompanied by the furious strumming of her bandmates using utterly indulgent punk rock riffs, the tent erupting into unbridled chaos. The hard hitting ‘Reincarnate’ fuelled a pit that was born of resentment towards the very topic it entails. Witch Fever are not one to miss and Walpole was born to be a front woman. [JM] 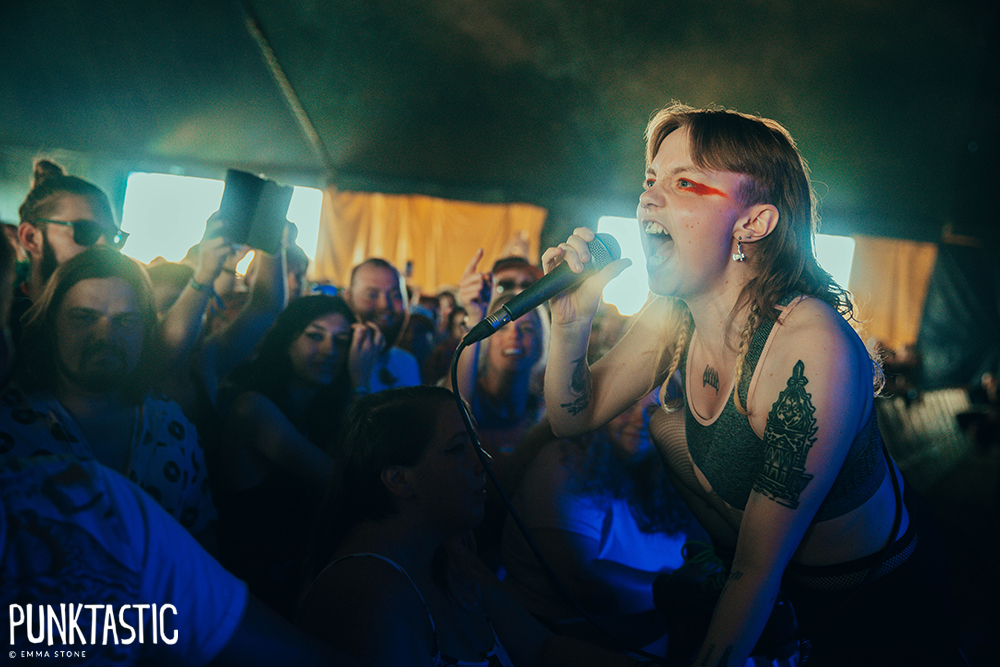 Before the show began, there was already an air of anticipation within the tent, slowly building with every minute that passed for the band who have been making quite a name for themselves. Opening with a soundbite of the iconic Will Smith and Chris Rock moment from this years Oscars, it filled the room with a sense of irreverence, presenting a band that don’t take themselves seriously on most accounts (other than the hugely left wing nature of their lyrics that is). The mosh pits were electric the entire time, the crowd listening to frontman Jack Wilson spewing angry offerings fuelled by a lacklustre view of the world. It was seconded by us, chanting the iconic lyric “Is it you can’t change? Or that you won’t change?” from track ‘New England’, clearly showing that the band’s thinking is a shared viewpoint. The two guitars present amongst the foursome are felt and appreciated throughout the set, paving a heavy mixture of layered string pulling that adds tonnes of depth that the bass and drums enhance. Bassist Eddie Lewis was out of control in the best way, taking centre stage for a solo that was met with a typhoon of appreciation from the crowd. Not one person in the tent could look away from the beautifully chaotic amalgamation on stage. [JM] 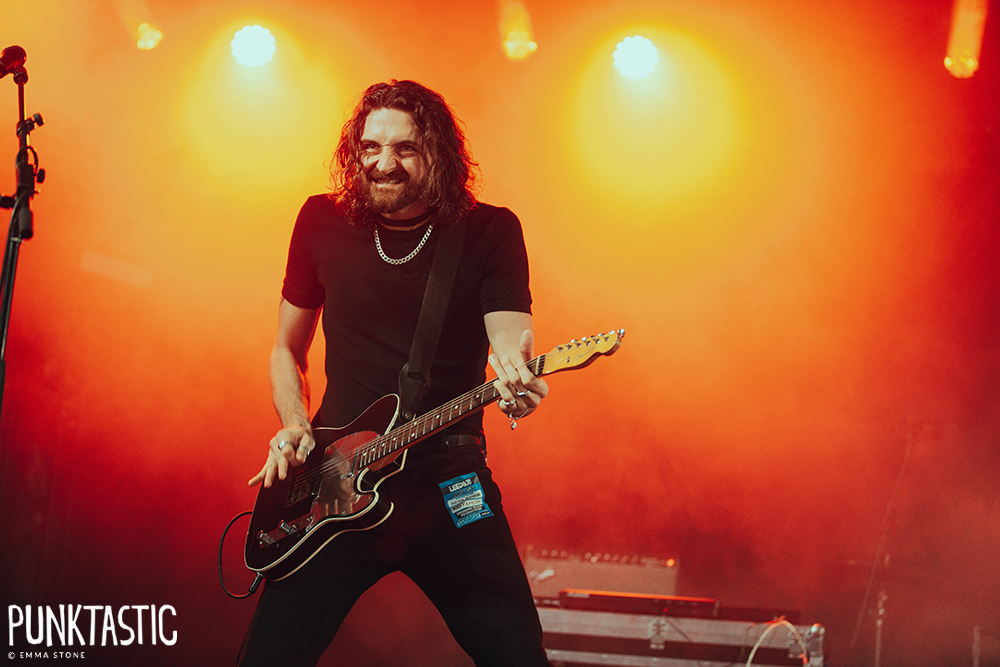 The British standard of indie rock, these fellas have been around the block a couple of times, solidifying their names in the genre canon. They are the perfect band to watch in the afternoon sun with drink in hand and friends by your side. Their set was full of crowd pleasing classics like ‘Fossils’ and ‘Jacqueline’, the words of both being loudly echoed by the sea of people watching. Not a band to be outshined by their legacy, the group have an edge to them when playing live; the small twang of the guitar and buzz of the bass gives the performance a little grit and variation from their recorded material. A potential weekend highlight is ‘T-Shirt Weather’; the sun is shining down on us on the last weekend of the summer, and it feels like a momentous shared moment for all of us as we made memories that we could later reminisce on whilst thinking of this track. [JM] 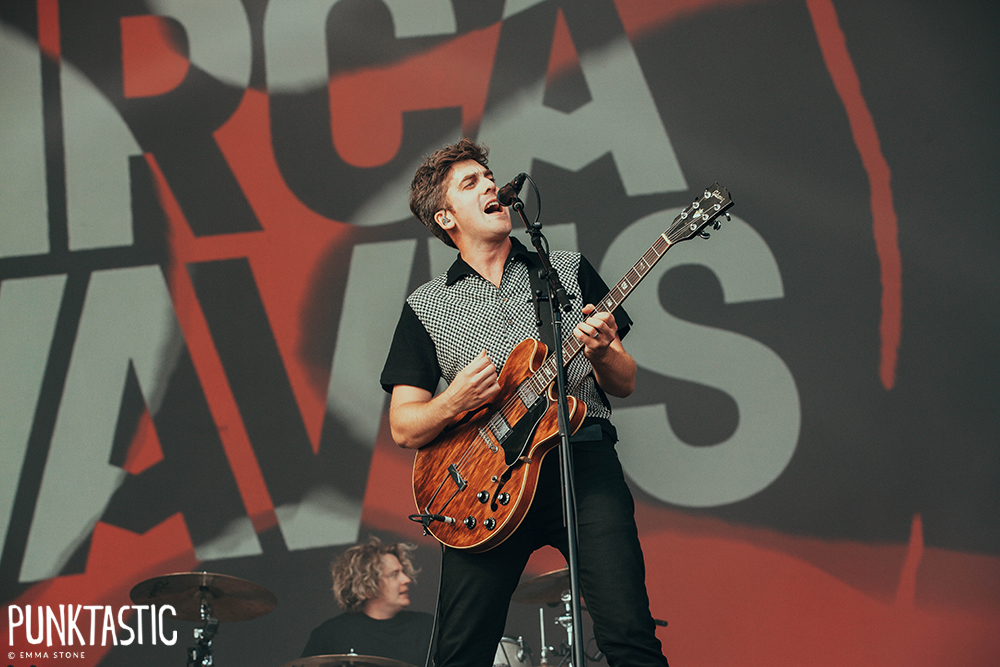 Their foundations are so laden within pop punk history that it would be impossible for this set to not make its mark on the weekend and its attendees. Although the band are a little older, their songs are nostalgia-ridden and ultimately impressive. Though at times a little jarring with americanisms, frontman Alex Gaskarth was an enthusiastic presence overall, at times telling everyone to put their phones away or get on top of people’s shoulders, making the closeness of the crowd palpable. A surprising addition was a cover of The Weeknd’s track ‘Blinding Lights’, adding layers of thick bass and rock to the already melodic tune; it was an interesting choice that they certainly pulled off. An explosive cannon of confetti accompanied the band’s magnum opus ‘Dear Maria’ which inclines even passers by to join in with the iconic chorus. It was a great crescendo for the band that have undoubtedly earned their spot in the punk rock hall of fame. [JM] 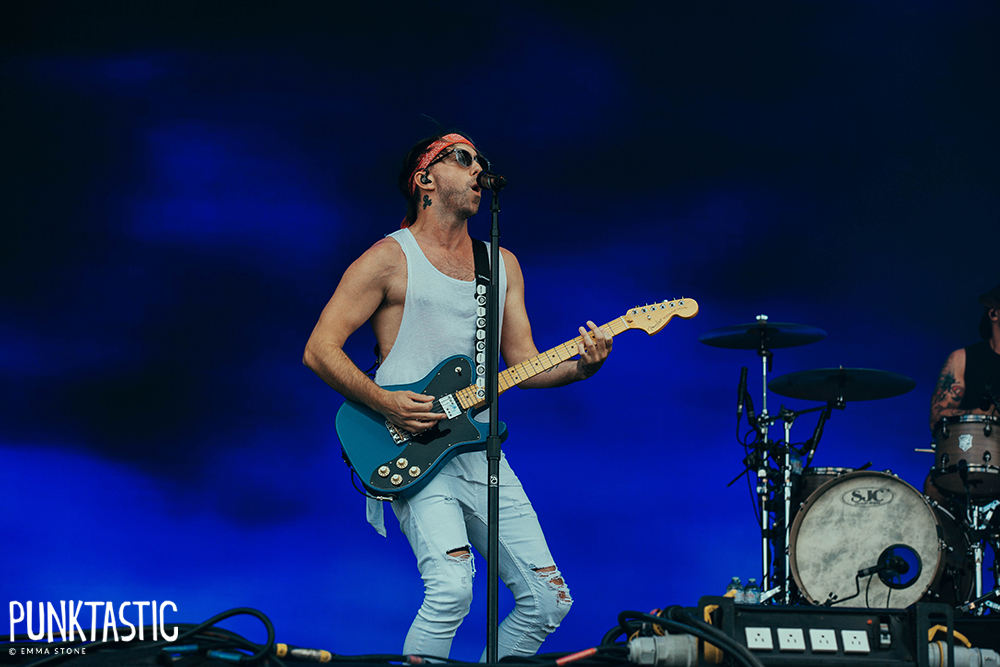 Opening with a classical piece of music that took the Festival Republic tent by surprise was the playful Tigress, a five piece British rock band that have stirred the scene with their polished sound. The pink hair of frontwoman Katy Jackson is indicative of her performance style that oozes confidence as she spearheads the band’s setlist. With melodic bridges surrounded by classic punk motifs reminiscent of the early 2000s, this band weave a clever story with tracks like ‘Alive’ and ‘Power Lines’ being standouts. The crowd head banged in unison with each beat in utter appreciation of their perfected performance style, able to add a glossy finish to heavy sound that’s unlike other bands in the punk space while managing to remain cheeky and genuine. It has to be noted that the band have been short-changed in this slot, which doesn’t allow their full performance capability to shine, but if they continue down their current path it won’t be a surprise to see them climb up the billing in the coming years. [JM] 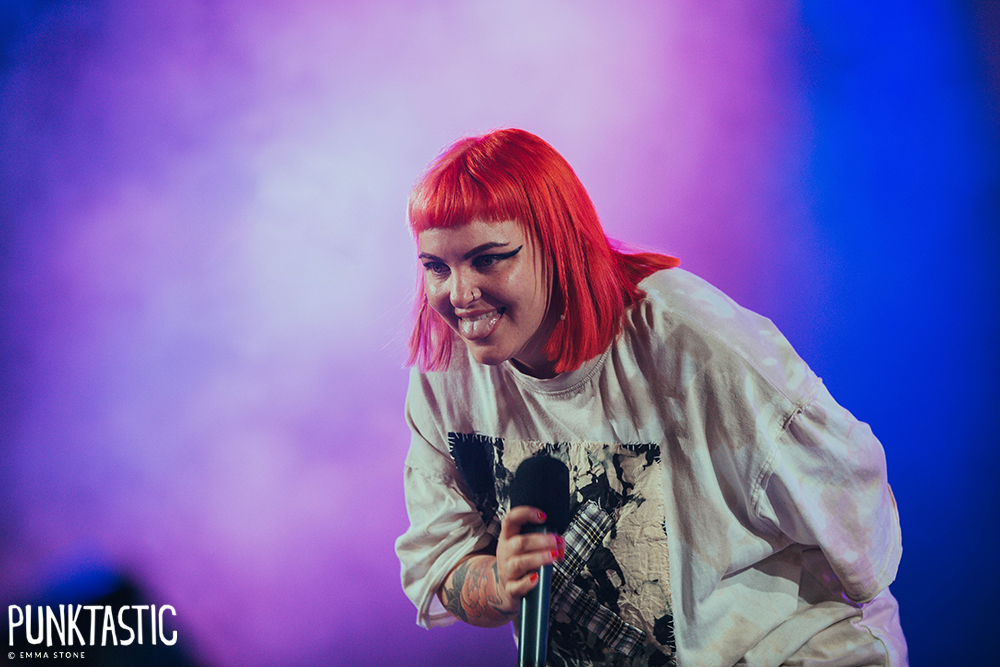 Cleopatrick wasted no time setting the tone for the 30 minutes that were about to follow. They opened with the high tempo and ravenous ‘OK’, identifiable with the twisted guitar sound that lays waste to its other components. What followed was a sea of sweat drops and hair strands that ebbed and flowed with each riff and track change. The equally heavy hitting ‘GOOD GRIEF’ and ‘hometown’ made a mockery of all music that came before them judging by our collective reaction. It is hard to believe that only two men onstage can create so much noise. When front man Luke Gruntz entered the crowd he was immediately sucked in, only to reappear after a minute to the eruption of applause from everyone in attendance. They are a heavy amalgamation sent from above – not only did they fill the tent, but they commanded it. One only hoped that they didn’t decide to end the world because in that moment, we’d have been with them. [JM] 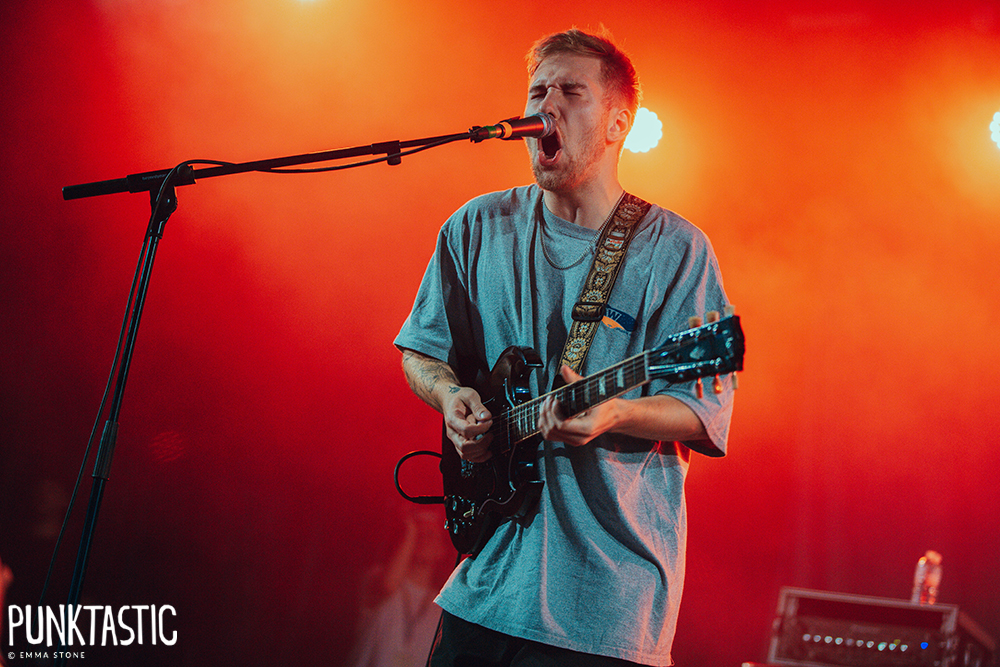 A band with a reputation like As It Is possesses has high standards to achieve, and they surpassed them with ease to the joy of their full tent. By all accounts they are a band that achieved success amongst an overcrowded pop punk space, doing a damn good job but never breaking the wheel. However, their discography does not do them justice when comparing them to a live setting. They bring a clarity to their sound that could only be defined by years of honing in on their craft, and when added to the production and showmanship of a live show they are exponentially elevated. The reflective yet heavy ‘I MISS 2003’ was met with furious and melancholic nodding of the crowd, which was as distinctive as the beat drops. Lead singer Patty Walters has a clear and powerful voice that cut through the mosh pits and emotionally delivered astonishing vocals. The lights flickered purple and white as they expressed it’s no longer their show; it’s ours. The sentiment is all but returned to the band that decided to be better than themselves. [JM] 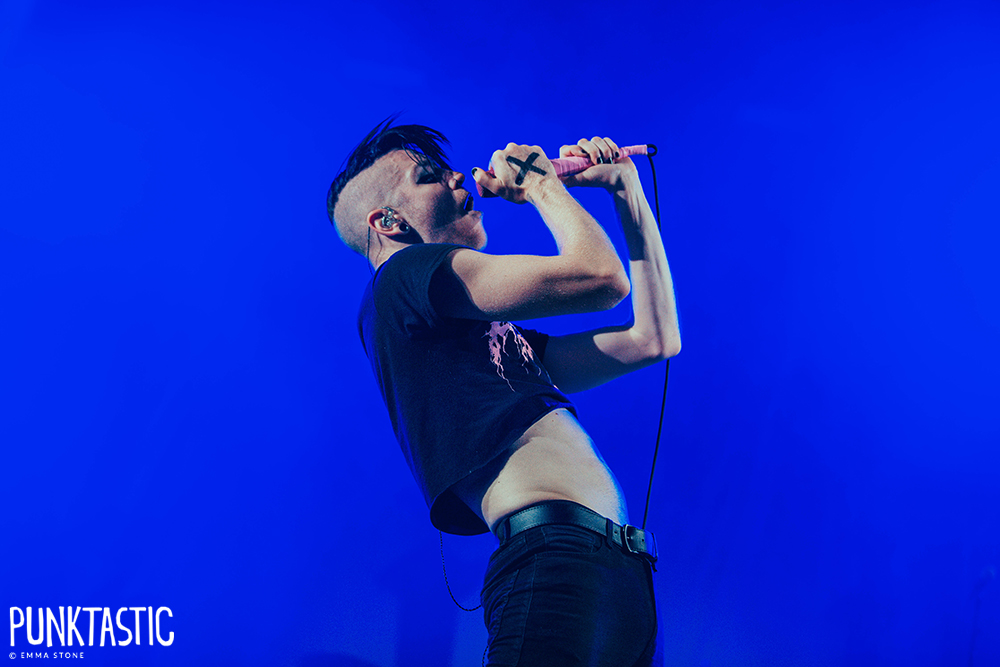 Fever 333, unsurprisingly, were able to ignite a fire as they blitzed over ‘BITE BACK’, ‘ONE OF US’ and ‘Made An American’ with an anger shared by the crowd. The entire tent became consumed by a huge pit and all were happy to join in because, during that short time, those of us in the tent had a safe space to let go. Their sound is about as far from stale as you can get, with colossal walls of drum patterns and towering guitar motifs being created by the members; hard to follow at times but always intricate and expertly placed behind the vocals. The lyrics themselves are a breath of fresh air, dispelling myths about racism, sexism, homophobia, guns and a plethora of other topics that don’t get brought up in music with the same intensity and knowledge the band possess. Whilst they are an overtly heavy band it never feels gratuitous, it’s always necessary to get the point across, the fights they continue to advocate for cannot be won with meekness. Guitarist Stephen Harrison climbed high into the stage rigging in a final moment of opposition as the band played an encore that they expressed wasn’t planned. We were gifted by a truly unique performance from a band that say all the right things in all the right ways. [JM]

Willow jams out to Primus on guitar, gets seal of approval from Les Claypool