For obvious reasons, it’s been three years since the last ArcTanGent festival. For 156 long weeks, fans of math-rock, post-rock, post-metal, ambient and noise fans, plus weird alternative music nerds of all other persuasions, have been without their mud-swamped mecca. Well: ATG is back, and it brings with it one of the finest, if not THE finest, “leftfield” alternative festival bills of all time. Also the sun is out, which is unheard of at this particular festival; ATG is usually a treacherous bog by about halfway through the second day. All the ingredients are there for this to be the best iteration of the festival in its history – so without further ado, let’s talk about the bands and artists that made this weekend so incredibly special.

Despite an early-ish billing on the Thursday while many are still arriving and setting up camp, Edinburgh-based prog-metallers Dvne manage to pretty much fill the newly-enlarged main stage with both eager fans and their enormous sound. Opening with the lurching ‘Towers’ from 2021’s incredible ‘Etemen Aenka’, they create a sea of headbanging that doesn’t let up until the swirling ending and final chords of ‘Satuya’ ring out. They may have been low-ish on the bill and only played four songs, but in that short time they’ve managed to set the bar for the day incredibly high. [LK] 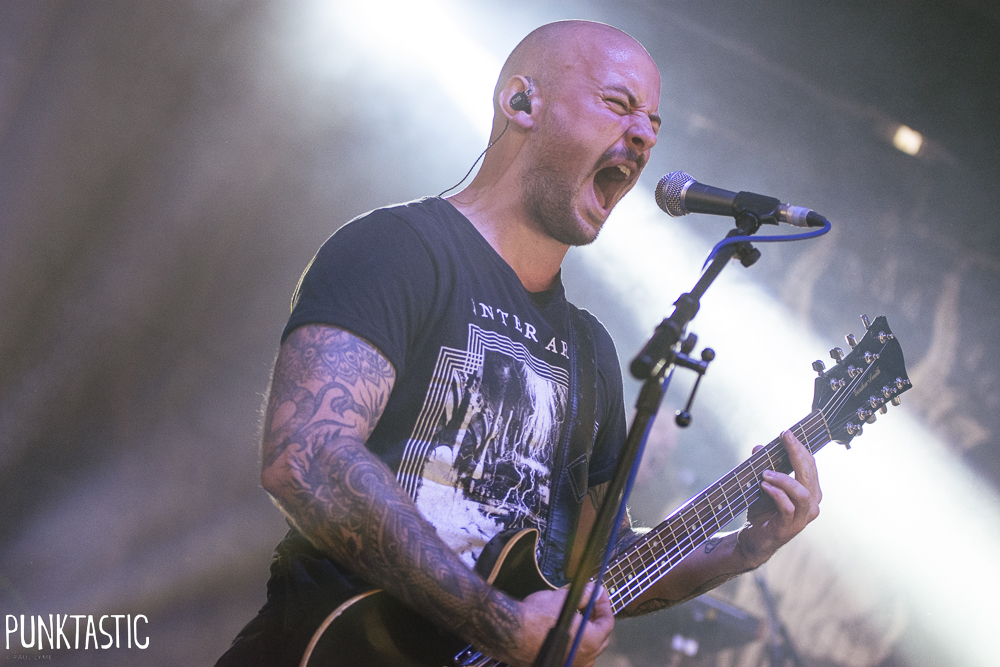 A.A. Williams last played ArcTanGent in 2019, opening up the main stage at 11am on the Friday. Her ethereal voice and haunting melodies provided the perfect set to soothe away the hangovers from the previous night’s silent disco, but it was relatively quiet as she had only released her debut EP a few months prior. Fast forward three years and she’s back on the main stage, much higher up the bill playing to a rapturous response. Her set is a solid mix of material from across her relatively short career, including stellar new single ‘Golden’ and a heartbreaking rendition of ‘Melt’ to close the set. This certainly won’t be the last time we’ll see A.A Williams at ArcTanGent, but who knows how high up the bill she will have climbed by then. [LK] 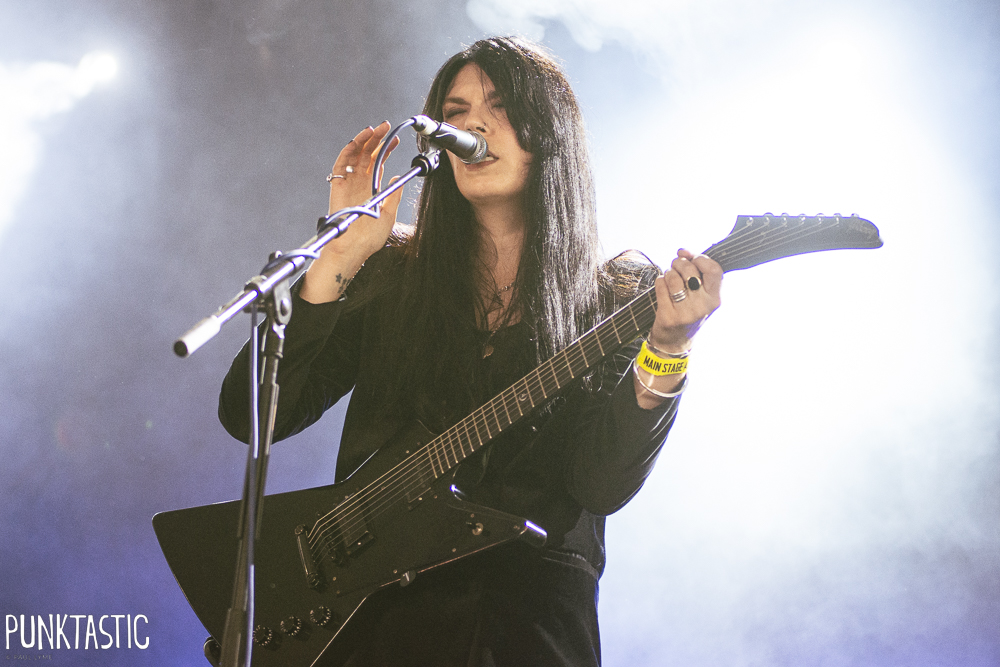 Clad entirely in black other than their menacing golden masks, Imperial Triumphant couldn’t be further away from the gothic tranquillity that A.A. Williams brought with her earlier in the afternoon. The New York-based trio blend black metal, art rock, jazz and, well, just about anything else you could imagine into a sound that is as captivating as it is baffling, at least on record. Unfortunately, their sound in the Bixler tent isn’t good enough to pick up all the intricacies that make their songs so interesting, so what should be a mind-boggle becomes a mud wall. Still, very fun to watch and undoubtedly a band to see on their own terms at a venue where they have more control over the experience. [LK]

With the arrival of Perturbator on the main stage, the party has well and truly started. The French synthwave maverick brings with him a headliner-worthy light show, all centred by a flashing pentagram at the apex of the stage. This, combined with an obscene amount of smoke, makes for the perfect backdrop to the apocalyptic rave that is Perturbator. This might seem like an odd booking for what is predominantly a rock and metal festival but the tent is absolutely rammed and people positively lose their minds to tracks like ‘Future Club’ and ‘Humans Are Such Easy Prey’. The success of this set, plus that of Carpenter Brut at 2019’s event, will surely open the door for more of this sort of thing to appear at ArcTanGent – and the vibe will be all the better for it. [LK]

Bossk face one of the nastiest clashes of the day as they hit the Bixler stage at the exact same time that Alcest grace the Yokhai tent but this doesn’t seem to phase them as they switch between glistening instrumental sections and pummeling, groove-laden riffs in front of a packed-out crowd. Founding vocalist Sam Marsh is currently out of action for personal reasons, but Simon Wright (ex-Krokodil) seems more than comfortable stepping into his shoes; his monolithic roar sitting perfectly atop tracks like ‘Kobe’ and ‘Heliopause’. Their performance is incredibly powerful but things are taken to another level when Bossk are joined by Cult of Luna’s Johannes Persson for a devastating rendition of ‘Menhir’, providing one of the most awe-inspiring moments of the entire weekend. [LK]

Is there a more harrowing sound on the planet than Belgium’s Amenra? Certainly no band as extreme as this one could command a festival main stage in the same way. Their blackened brand of post-metal creates a wall of sound that obliterates anything in its path, while Colin H. van Eeckhout’s tortured shriek causes whatever is left to shrivel and wilt. (Side note – is he the scariest person ever to be called Colin? Almost certainly.) Tracks like ‘Razoreater’, ‘De Evenmens’ and fan favourite ‘A Solitary Reign’ sound monstrous, to the point where you’ve got to feel sorry for Mclusky trying to set up and soundcheck in the nearby Bixler tent. It’s hard to say who the “best” band of the weekend are but Amenra have to be in the Top 5. Absolutely spellbinding. [LK] 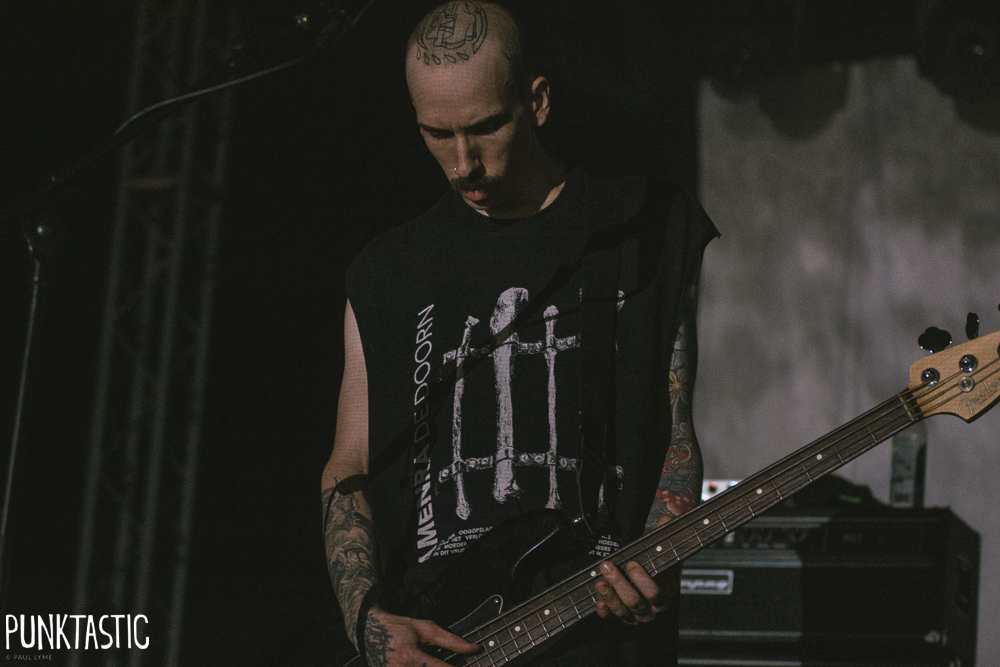 Maybeshewill have always had a core of incredibly dedicated fans and a lot of them are here this evening, seeing their favourite band for the first time since their “final” show in 2016. The excitement is palpable as the Leicester post-rock outfit paint intricate sonic pictures with their cleverly layered combination of instruments, synths and samples. Playing with dynamics, Maybshewill weave delicate melodies into enormous, all-encompassing waves of sound that ripple around the tent, bathing the crowd in cleverly constructed symphonies.

As darkness falls, the stage lighting serves to amplify the already emotive atmosphere, evoking a growing sense of euphoria . Playing a mixture of favourites as well as tracks from last year’s ‘No Feeling is Final’, the sea of bodies inside the Yokhai tent remain transfixed for the hour long set. The ebb and flow of each elaborately constructed track is echoed in the energy of the audience, with emotions visibly spilling out in response to Maybeshewill’s powerful delivery of their skilful writing. As the band watch in appreciation at the crowd singing along to the closing few words in ‘He Films the Clouds Pt.2’, it’s hard to tell which of them is most elated to be here. [EO] 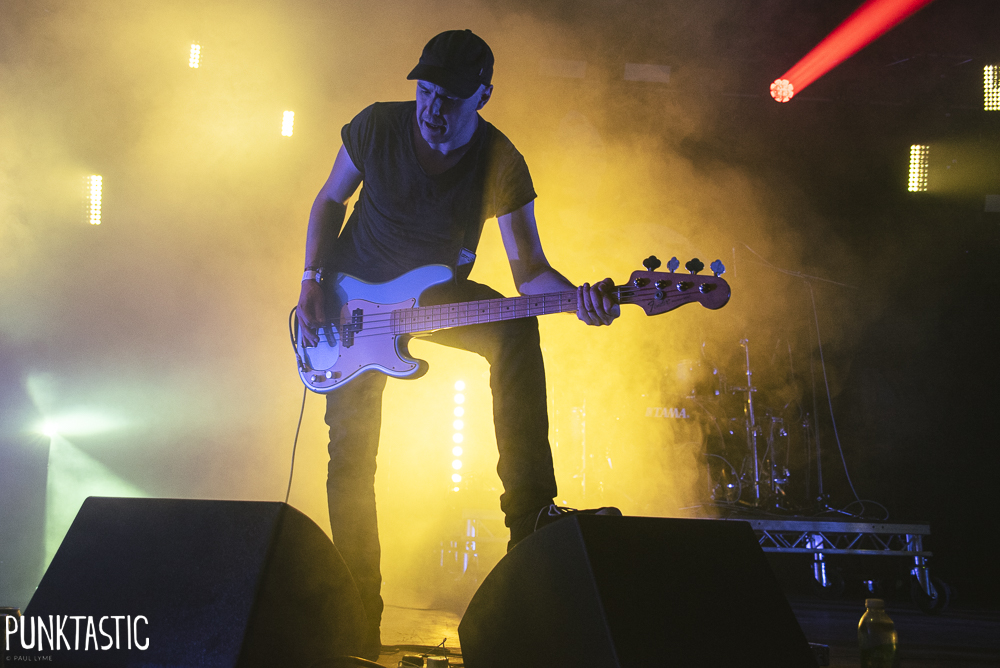 We Never Learned To Live

The unenviable task of clashing with the main stage headliner (the mighty Cult of Luna) falls to We Never Learned To Live, who are here at ArcTanGent to play their last ever show. Bittersweet though this appearance may be, that doesn’t stop the fans from going absolutely wild as they launch into ‘Permafrost’, followed immediately by ‘Android Anaesthetist’ – the same one-two punch that opens 2019’s stunning album ‘The Sleepwalk Transmissions’. Material from this record makes up the bulk of the set, but there’s still room for some classics, including a few songs from ‘Silently, I Threw Them Skyward’ and ‘Kepler’ – the closing track from their debut self-titled EP – to close the set. While We Never Learned To Live may not have hit the same heights as some of their peers, they clearly resonated with a lot of people, and that is evidenced by the passionate screams and flailing limbs of the crowd who have shunned one of the biggest post-metal bands on the planet to watch one of the UK’s finest underground bands give the performance of a lifetime. It’s sad to see them go but they leave a perfect discography behind them, and the memory of this special performance that no-one present will ever forget. [LK]

Crashing relentlessly into the epic introduction of ‘Cold Burn’ from latest release ‘The Long Road North’, Cult of Luna exude a commanding stage presence despite being barely visible, shrouded in plumes of atmospheric mist. It’s doomy post-metal but with an undefinable air of warmth and reassurance – the slower, rhythmic beats lacking the frantic intensity of more chaotic bands in the genre. Big, chunky riffs sit comfortably below metal screams, with eerie synth and slowly building cymbals morphing into soundscapes which captivate the listener, transforming the mood into that of an otherworldly adventure.

Cult of Luna are not a mosh-pit band, nor do they run about the stage in a show of ferocious energy but they juxtapose the heaviness of pounding drums, tortured vocals and cleverly-timed moments of almost nothingness to take the crowd on a journey of dark, enchanting noise. The entire set is carefully considered, with subtle changes of tempo and volume constantly underpinned by that driving, marching beat and ever-flowing energy. Closing with ‘Blood Upon Stone’, the set is book- ended by tracks from the most recent album in a final crescendo of huge proportions. The entire tent is engulfed in layers of dramatic distortion at the climax of a perfectly performed spectacle. Cult of Luna’s strength is in the songs. In lieu of theatrics or overt showmanship, their exquisitely crafted tracks deliver an experience that’s hard to put into words, something that’s apparent as the awe- stricken and starry-eyed crowd begin to disperse into the night. Cult of Luna have closed the first night of ArcTanGent with indomitable style, a promising notion of what is yet to come. [EO] 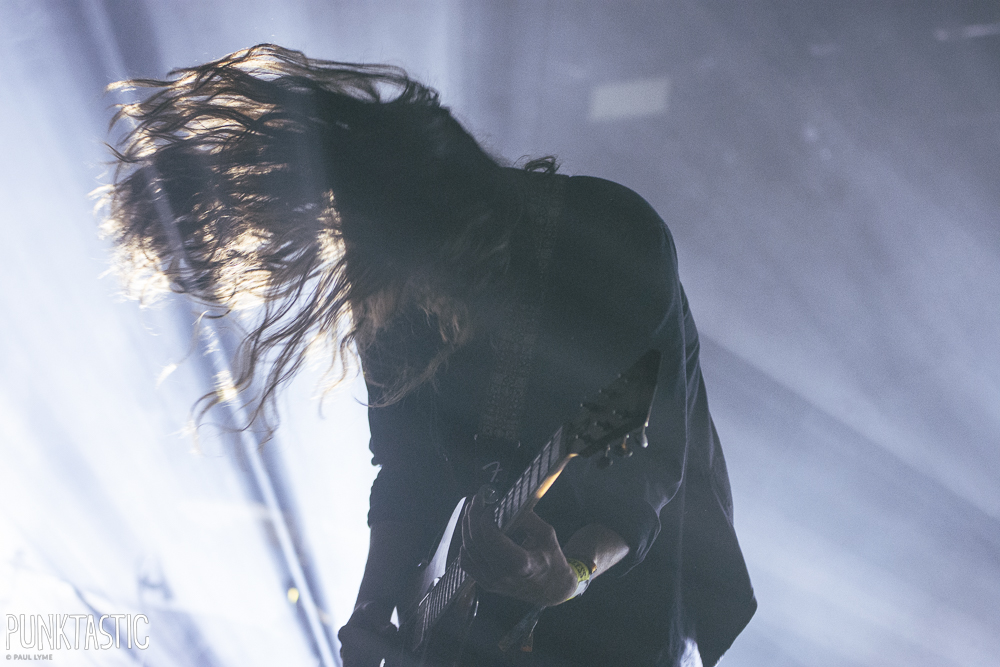